This article is a stub. You can help Tower of Druaga Wiki by expanding it.

Main article: The Tower of Druaga (location)/The Quest of Ki

Ki goes to the tower in a attempt to recover the Blue Crystal Rod, and manages to reach the 60th floor with the help of the dragon Quox, who had show her shortcuts in the tower. However, Druaga found Ki in the last floor and transformed her into stone. Druaga split the rod into three and hid them in different floors. After completing the game, the player can go to 40 extra bonus floors, making a total of 100 floors in the game.

Gilgamesh enters the 60 floors tower to save Ki and recover the Blue Crystal Rod. While in the tower, Gil manages to recover the three rods and defeats Druaga in the 59th floor. With Druaga's magic dispelled, Ki and Quox returned to normal, but the tower also returned to its ruined state when hit by Anu.

Main article: The Tower of Druaga (location)/The Return of Ishtar

Gil and Ki must find the exit of the tower, passing by several of the 128 rooms while facing the monsters wandering the tower.

The remains of the tower is a optional location that can be visited by Gil and Ki. Inside the tower there are only 5 enemies present in a set area: A Slime, Bat, Vampire, Snake, and Roper. Gil and Ki can talk with Quox. The tower also has a single treasure chest.

Main article: The Tower of Druaga (location)/The Nightmare of Druaga

Skulld takes Ki to the Dark Ruins, which is in the remains of the tower. Later, Gil revisits the tower when he travels back in time to save Ki.

In Seme COM Dungeon: Drururuaga, Quox can be fought in the remains of The Tower of Druaga.

The tower is visited by Gil and Young Ki in Druaga Online: The Story of Aon.

In the anime, the Tower of Druaga was recreated several years ago after Gil defeated Druaga.

Each of them also has areas called gardens, like the Camel Garden in the Tin Shrine and the Ram Garden in the Iron Shrine. A city called Meskia was built in the bottom of the tower. Once in a while the magic of the tower is weakened during a period called the "Summer of Anu", and Climbers take the opportunity to climb the tower.

In The Tower of Druaga: The Aegis of Uruk, the royal army began an attack to the tower during the Summer of Anu, and Druaga was defeated by the remaining soldiers and climbers. After Druaga's defeat, the tower was renamed as "The Tower of Gilgamesh" and Meskia became the kingdom's capital.

The original Tower of Druaga with 60 floors appeared in episode 8 inside the new tower, where Kaaya controls Jil by using an arcade and Ahmey gives instructions on how to obtain the treasure chests. The entrance has a shop run by a ghost. 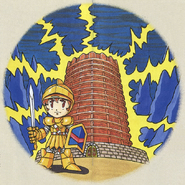 Gil in front of The Tower of Druaga.

The tower being built.

The tower crumbled into ruin,
Add a photo to this gallery
Retrieved from "https://towerofdruaga.fandom.com/wiki/The_Tower_of_Druaga_(location)?oldid=5589"
Community content is available under CC-BY-SA unless otherwise noted.