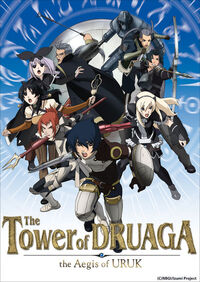 The Tower of Druaga: Aegis of Uruk is the first season of the Tower of Druaga anime reboot. It began airing on April 1, 2008, and concluded on June 20, 2008. It consists of twelve episodes and follows the journey of Jil, Kaaya, Neeba, and other adventurers climbing the mysterious Tower of Druaga. It was dubbed into English by FUNimation.

Retrieved from "https://towerofdruaga.fandom.com/wiki/The_Tower_of_Druaga:_The_Aegis_of_Uruk?oldid=5465"
Community content is available under CC-BY-SA unless otherwise noted.