This article is a stub. You can help Tower of Druaga Wiki by expanding it.

Slime (スライム Suraimu) is a common type of enemy from the Babylonian Castle Saga that appear in several games. Slimes are a small gelatinous-like living organism with low intellect that tremble and jiggle when moving.

Slimes are weak enemies that can be killed with a single hit of the sword, but they can also kill Gil by just touching him, regardless of how strong he is. Slimes are immune to damage while moving. There are six types of Slimes in The Tower of Druaga:

In the Game Boy version, two Big Slimes (ビッグスライム) are the bosses from Floor 10. They attack by releasing two consecutive spells.

All six Slime types return as enemies, and the game has the addition of the Yellow Slime and Pink Slime.

Only Green Slimes appear, some being shown in the prologue and one as an enemy in The Tower of Druaga.

There are four types of Slime in the game: Green Slime, Black Slime, Mage Slime (Red Slime), and Heal Slime (Blue Slime that heals allies instead of attacking enemies). They are respectively the Spell Cards no. 41 to 44.

Slimes appear once again as enemies, and the first boss is a giant Slime called Primitive Slime, which can only be damaged in its Slime Nucleus.

Green Slimes appear in some episodes from The Tower of Druaga: The Aegis of Uruk, including the first episode, where Fatina kills many of them with a spell, and the fifth episode, where one the traps temporarily transforms the victims in slimes. A Red Slime appears in the episode "Tower of Legend", where Kaaya plays the Tower of Druaga game and controls Jil to reach the top. 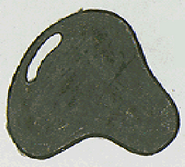 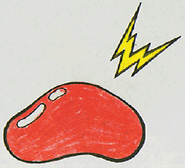 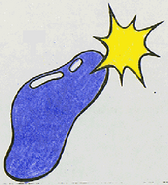 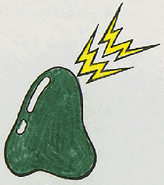 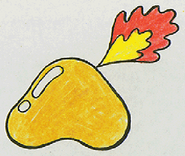 Slime in the Game Boy version of The Tower of Druaga 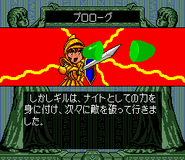 Gil killing a Green Slime in the prologue from The Blue Crystal Rod.

Heal Slime in Seme COM Dungeon: Drururuaga
Add a photo to this gallery

Retrieved from "https://towerofdruaga.fandom.com/wiki/Slime?oldid=5353"
Community content is available under CC-BY-SA unless otherwise noted.