Druaga (ドルアーガ Doruāga) is the main villain from the Babylonian Castle Saga. He is an evil demon with green skin, eight arms and four legs.

Gil goes to the Tower of Druaga to save Ki and fights Druaga in the 59th floor. Druaga sends personifications of him to face Gil, starting by a Hyper Knight, then Wizards, and lastly a fake Quox. After defeating the three, he appears in person. Druaga has great strength and speed, and is able to warp through walls. Despite all his power, Gil manages to slay him and frees Ki.

In the second room, Druaga's Grave, there is an image of Druaga with R.I.P. written on it. In rooms 94 and 127 there is an enemy with Gil's appearance named the Soul of Druaga.

Druaga is shown in the prologue, which explains events from previous games. Depending of the player's actions, Gil and Ki can go to the underworld to talk with Druaga.

Druaga is the final boss, where he uses the Diamond Mace to become Drururuaga (ドルルルアーガ). As Drururuaga, his appearance is the same, but his power is far greater than before. Despite this, Gilsh manages to defeat him in the top of the tower.

Druaga can also be summoned with a Spell Card, but he will attack both allies and enemies present in the room he is inside.

Druaga appears as a boss. When Gil returns in time, he faces Druaga again in the 59th floor of the tower. After his defeat, Druaga merges with Succubus and becomes Ultimate Druaga, highly increasing their powers, becoming a giant being whose only the head and the eight large arms are visible.

Druaga Online: The Story of AonEdit

Druaga is fought several times and is the final boss. In the final battle he has two alternate forms: Dominion Druaga (ドミニオンドルアーガ) and God Druaga (ゴッドドルアーガ). Both forms have two types of wings and blue skin.

Eight years after his defeat, Druaga revived and created a castle named Gal Aon Adem in Aon, where he uses a demon army to conquer the land. Four heroes part on quest to save the land, which results on them saving Princess Inana and obtaining the Rainbow Crystal Rod, which can be used to defeat Druaga. When the heroes arrive to Druaga's throne room, Inana helps them by using the Rainbow Crystal Rod to restrain his power. However, Druaga is too powerful for them even with most of his power sealed, and the heroes are separated. The heroes reunite again and return to the castle, and finally defeat Druaga after a difficult battle.

Appearance in other gamesEdit

Druaga appears in the crossover Namco × Capcom, where he was revived and makes an alliance with enemies from other games, including Astaroth. In Chapter 35, Gil and his friends found the Tower of Druaga and went inside, facing the enemies in the way. In Chapter 37 they reach the 59th floor and fight against Druaga. Like the game The Tower of Druaga, Druaga first sends a Hyper Knight, a Wizard, and a Quox before he appears in person, and he is defeat by the heroes. Later, the Soul of Druaga appears in Chapter 43 for a final battle, where Druaga has Gil's appearance.

Druaga is the boss of Stage 13 in Namco Super Wars. After his defeat, he returns in Stage 20 as Druaga Soul, having Gil's appearance.

Druaga also appeared as a secret boss in the games Tales of Destiny and Tales of Phantasia: Narikiri Dungeon.

Druaga appeared in Namco Museum Volume 3 for the PS1 in the intro, and in the "Tower of Druaga" exhibit. Druaga makes a physical appearance in the exhibit in a secret room in the back of the room, where if the player goes through the door they will encounter an open-envoirnment like area, with a gigantic version of Druaga standing in the middle, sword in hand and ready to fight. When in the room, Druaga will move up and down and make growling noises, adventurous music will play, and lightning will occasionally flash until the player leaves the room. Despite his threatening posture in the museum, Druaga is completely harmless toward the player, as his presence in the exhibit is simply meant to promote the playable classic Tower of Druaga game pre-built into the museum game.

Druaga has several appearances in the anime The Tower of Druaga: The Aegis of Uruk.

He first appeared in Jil's dream in the episode "The Great Tower of Druaga", where he says he is Jil's father (a parody of Star Wars) and plans to remarry. Jil's armor transforms and he faces Druaga in the sky, defeating him with the help of Ishtar and his friends.

In episode 3, Druaga is shown in a flashback being defeated by Gilgamesh 80 years ago.

Druaga appears as the final boss in the Tower of Druaga game in the episode "Tower of Legend", where Jil defeats him. Druaga also appears in a gigantic figure on the episode "One Solitary Shield" and in the last episode "You Zapped To...". 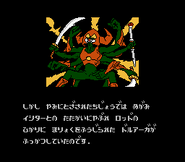 Druaga in The Quest of Ki. 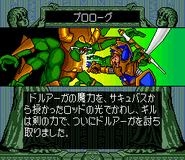 Gil defeating Druaga in the prologue of The Blue Crystal Rod.

Druaga in The Nightmare of Druaga: Fushigino Dungeon.

Ultimate Druaga in The Nightmare of Druaga: Fushigino Dungeon. 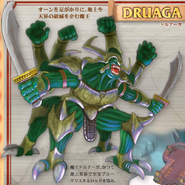 Druaga in Druaga Online: The Story of Aon.

Druaga in Druaga Online: The Story of Aon.

Dominion Druaga and God Druaga in Druaga Online: The Story of Aon. 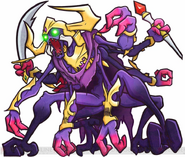 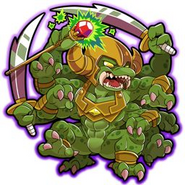 Druaga without his helmet.
Add a photo to this gallery
Retrieved from "https://towerofdruaga.fandom.com/wiki/Druaga?oldid=5650"
Community content is available under CC-BY-SA unless otherwise noted.